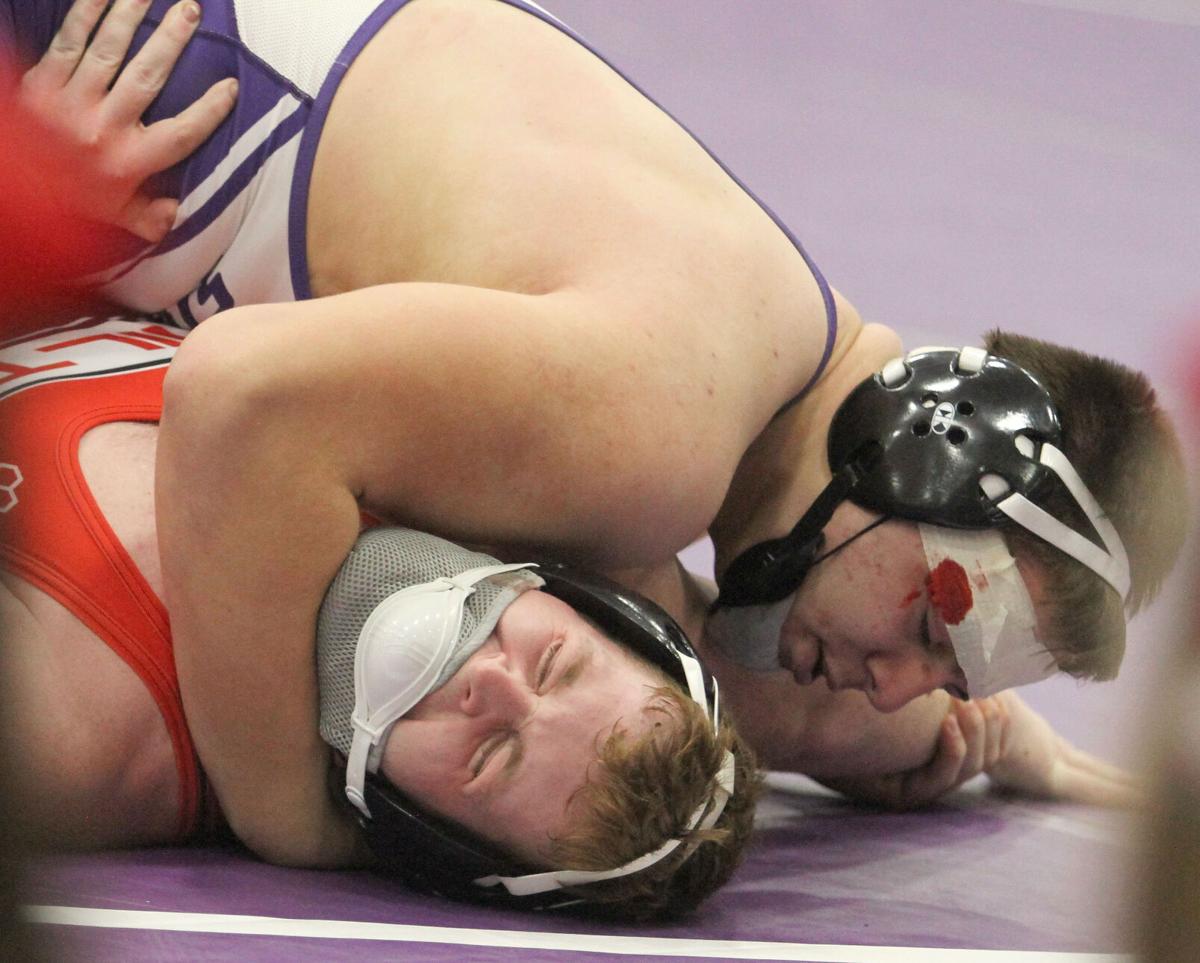 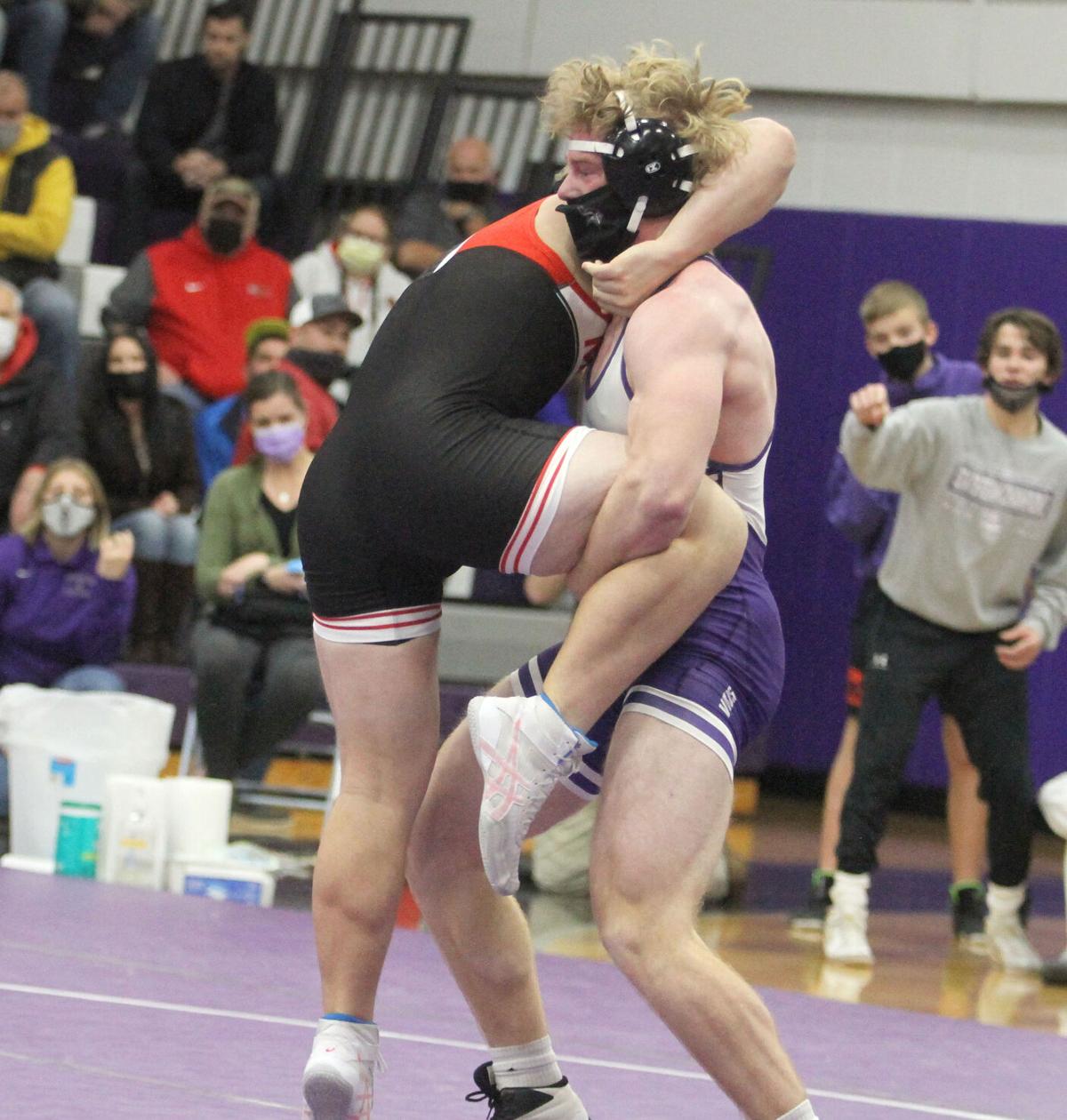 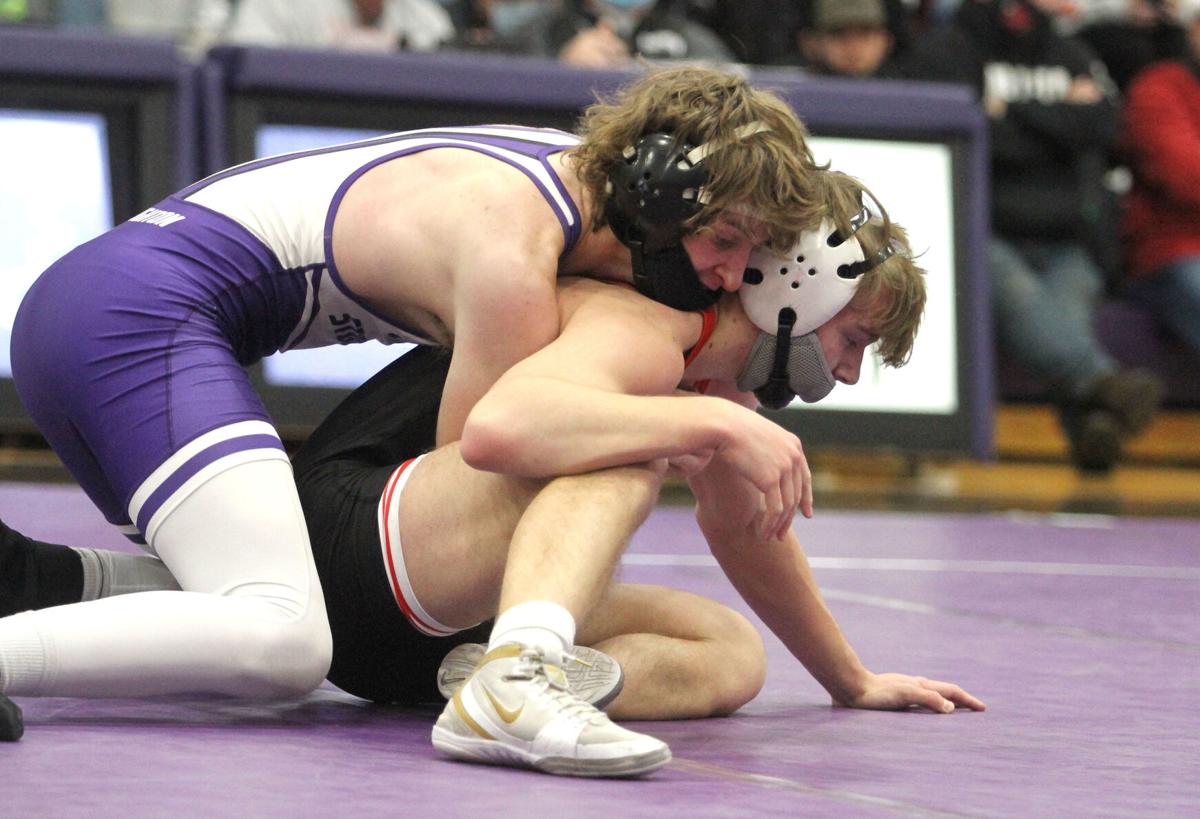 Stoughton senior Trenton Dow looks to turn Milton's Hunter Kieliszewski in a 152-pound match in a dual meet against the Red Hawks on Friday, Dec. 17, in Stoughton. Dow pinned Kieliszewski in 3 minutes, 24 seconds.

Stoughton senior Trenton Dow looks to turn Milton's Hunter Kieliszewski in a 152-pound match in a dual meet against the Red Hawks on Friday, Dec. 17, in Stoughton. Dow pinned Kieliszewski in 3 minutes, 24 seconds.

Stoughton, ranked No. 10 in the Division 1 Wisconsin Wrestling Online state poll, finished second behind champion Fennimore 246-208 in the 20-team invitational.

“People feel pressure,” Empey said. “I think pressure makes diamonds. We all understand when you join Stoughton wrestling you are expected to be good. If you feel pressure by it that’s good because it pushes you to work harder.”

Stoughton co-coach Dan Spilde said the team showed a lot of fight in the Badger State Invitational and needs to get healthy, find the little things like a leg attack, defense or escapes to help them improve. The Vikings could see the rival Red Hawks again in the sectional.

“It was a close enough dual,” Spilde said. “I think everyone would have paid $5 to come in and watch until the end.”

Stoughton’s Ethan Soderbloom broke his hand in practice and is out for six to eight weeks, Spilde said.

“He could be back by the end in a perfect world,” Spilde said of Soderbloom. “He has to get his body right. He’s really been coming on and had a nice start to the season. We are just hoping he can keep his body in shape and get that hand healthy.”

Both Rivera and Empey captured titles at the Badger State Invitational Dec. 18, at the Dane County Coliseum.

The event was moved from the UW Field House to the Coliseum because Spilde said Stoughton wants to grow the invitational and make it even bigger.

“We want it to be the premier girls tournament in the state of Wisconsin before the WIAA state tournament,” Spilde said. “We moved it to the dome so we have room to grow.”

The Vikings finished second out of 20 teams with 208 points. The tournament also featured 30 girls wrestling teams.

“Nicolar is really dominant and exciting to watch,” Spilde said. “He does a lot of things people want to see in wrestling because he’s extremely offensive.”

“It’s hard to put into words how dominating Griffin has been so far,” Spilde said. “He has pinned every opponent so far. Your only fear is how he will react if the match does get later. We are excited to watch him in later periods because we know he will get stronger. When his teammates and coaches push him he always has more.”

“Cole is one of the hardest working guys we have on the team and as a sophomore and as a captain it’s something we have never done before,” Spilde said.

Dow (15-2), ranked sixth, at 152 cruised to a 13-1 major decision win over Pewaukee’s Konnor Tubin in a quarterfinal match. He then defeated Iowa-Grant’s Emmerson Moen 8-4 in a semifinal match. In the title match, Dow was clipped by Racine St. Catherine/Lutheran’s Henry Amborn 3-1.

After two byes, Jemilo opened the tournament with a pin of Laona/Wabeno’s Frank Shepard in 6 minutes. He then lost a semifinal match to Fennimore’s Cameron Wolf 8-3. Jemilo lost a nail-biter to DC Everest’s Kyle Schmidt 6-4 in a third-place match.

Harman went 4-1 and posted four pins. He pinned Iowa-Grant’s Bode Bockhop in 29 seconds in a second-round match. Then in a quarterfinal match, he pinned Waunakee’s Kaden Hooker in 1:45. Harman then beat Hickman’s Drew Wooden by fall in 46 seconds. In a fifth-place match, Harman pinned Fennimore’s Dalton Wolf in 1:07.

The Vikings posted five pins, but couldn’t hang on against the Red Hawks in a Badger Conference dual meet Dec. 17, at Stoughton High School.

“Our goal was to try to close the gap to beat them and flip some of those matches we lost last week,” Spilde said. “We flipped the (John) Harman match.”

Sarbacker wrestled up a weight class at 145, and Milton’s Royce Nilo clipped him 3-0. Nilo is ranked seventh at 152. Dow (152) then pinned Milton’s Hunter Kieliszewski in 3:24 to give the Vikings a 16-12 lead. The Red Hawks answered with three straight pins in the middle weights to build a 30-16 lead.

“We tried bumping Sarbacker up to get another win, but Royce Nilo is an extraordinary 145-pounder,” Spilde said. “That’s two super elite top-five wrestlers in the state going at it. We were up a weight and we could see some of the power he (Nilo) had over us. It’s really tough to go up a weight and wrestle an elite kid and that is what we asked him (Sarbacker) to do because we thought we had the wins if we put Ethan Peterson there (138).”

Spilde said Harman’s match was a pivotal victory and put the Vikings in a position to win. Harman lost to Eckert by fall in the Wisconsin Dells Duals earlier this season.

“I’ve been around Stoughton wrestling for a while and I have always wanted to pin someone in the Milton dual,” Empey said. “I was really excited. It was a great feeling to fuel that comeback for the team.”

The Vikings forfeited at 106 and the Red Hawks got a pin at 113 to pull off the victory.

The Vikings improved on a previous 45-30 loss to the Red Hawks at the Wisconsin Dells Duals.