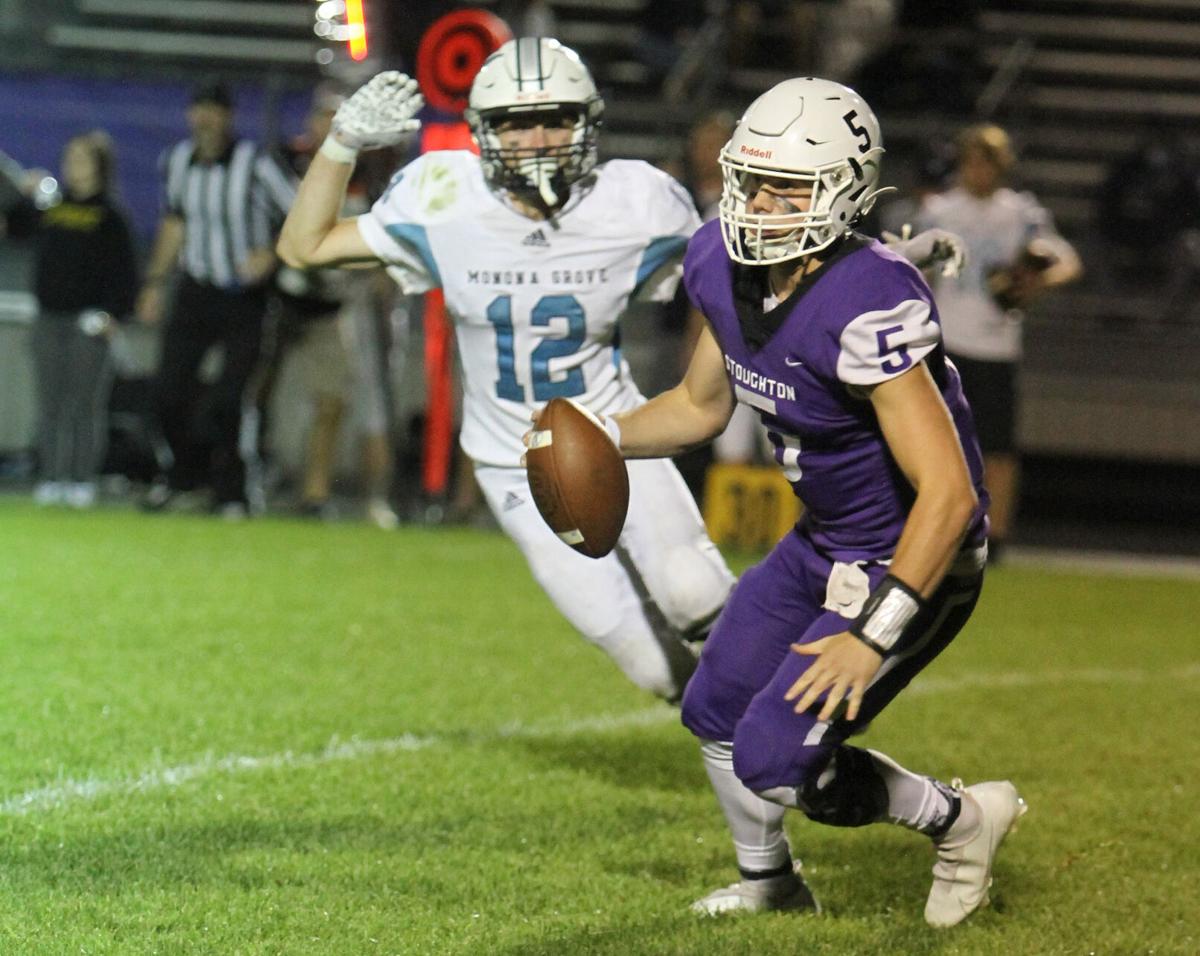 Stoughton senior quarterback Isaac Knutson looks to throw a pass as he scrambles away from Monona Grove's Cody Marron in the second half. Stoughton lost a Badger Small Conference game to Monona Grove 24-14 on Friday, Sept. 17, at Collins Field. 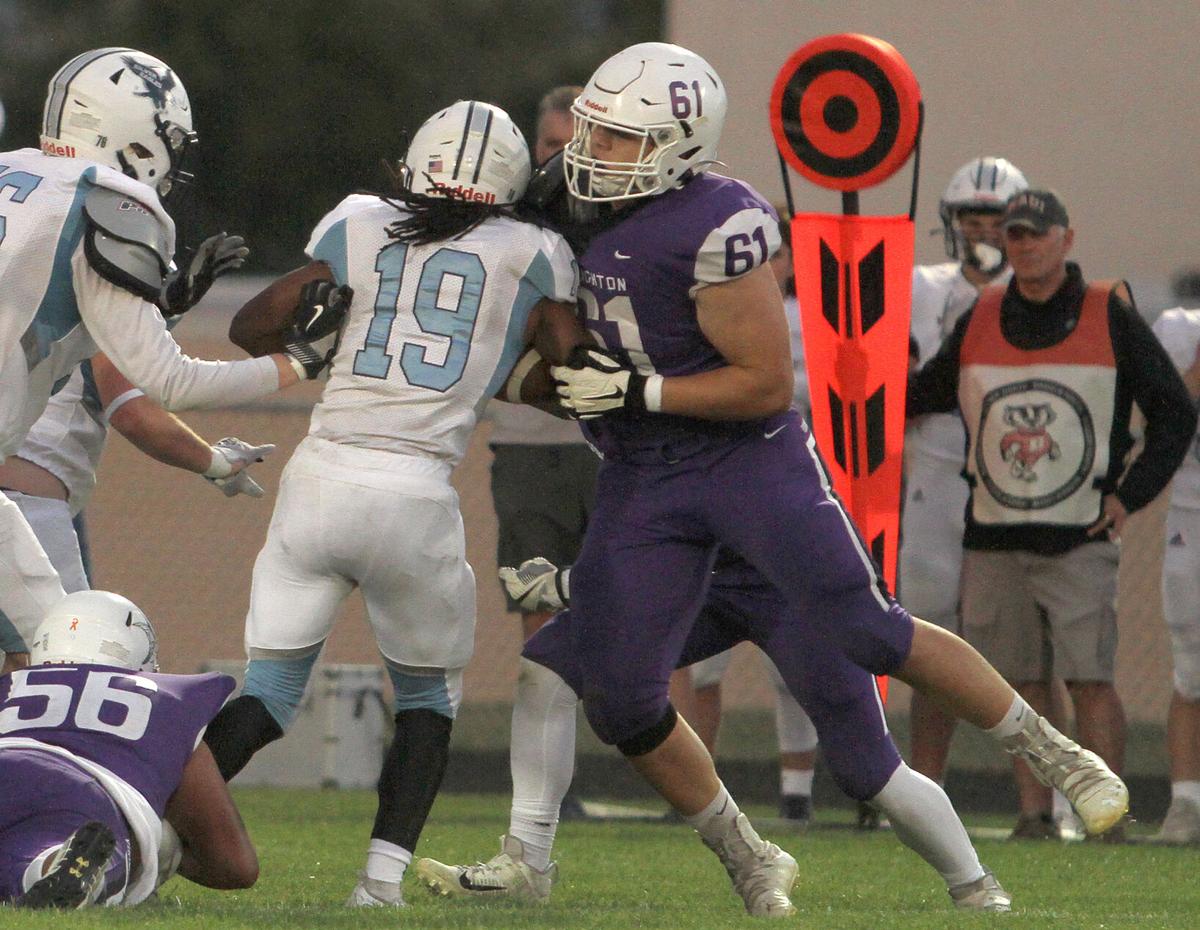 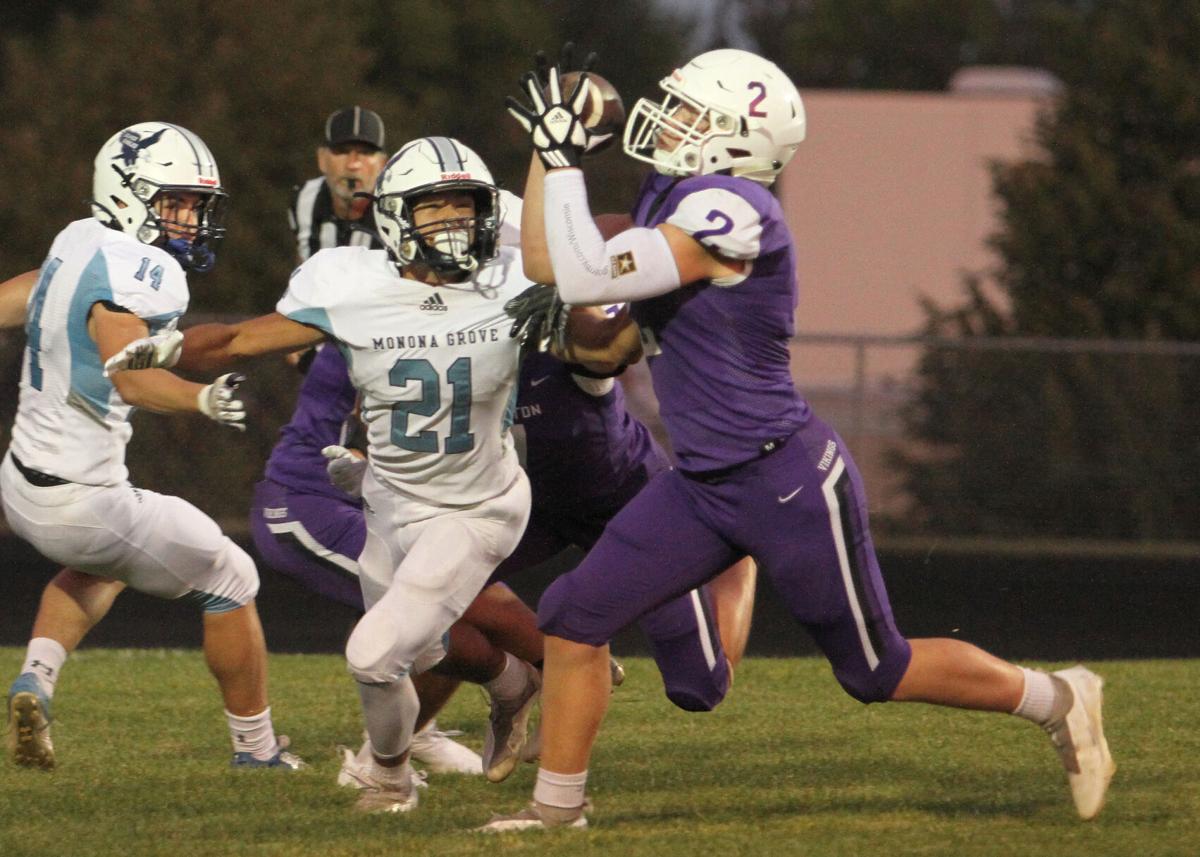 Stoughton senior linebacker Niko Jemilo (2) intercepts a pass in the end zone in front of Monona Grove senior Tyler Dahlhauser (21) and Cuinn Larsh (14) in the first quarter. The Vikings' defense forced two turnovers, but lost to the Silver Eagles 24-14 on Friday, Sept. 17, at Collins Field.

Stoughton senior quarterback Isaac Knutson looks to throw a pass as he scrambles away from Monona Grove's Cody Marron in the second half. Stoughton lost a Badger Small Conference game to Monona Grove 24-14 on Friday, Sept. 17, at Collins Field.

Stoughton senior linebacker Niko Jemilo (2) intercepts a pass in the end zone in front of Monona Grove senior Tyler Dahlhauser (21) and Cuinn Larsh (14) in the first quarter. The Vikings' defense forced two turnovers, but lost to the Silver Eagles 24-14 on Friday, Sept. 17, at Collins Field.

When a football team isn’t firing on all cylinders with an offensive in a funk, the penalties and miscues tend to snowball.

The Stoughton football team is searching for a way to get back on track after battling injuries, turnovers and penalties in a 24-14 loss to Monona Grove on Friday, Sept. 17, at Collins Field. It marks the fourth straight loss by the Vikings and it has tested the resiliency of a team that had hopes of contending for a conference championship.

“It’s all execution,” Stoughton senior quarterback Isaac Knutson said. “We put together great drives, but we shot ourselves in the foot with a holding penalty, or a dropped pass, not a good block or a bad ball (pass).”

Stoughton drops to 1-4, 0-3 Badger Small. Stoughton coach Jason Becker said the focus can’t be on qualifying for the playoffs at this time.

“We just have to focus on cleaning up our mistakes and get ready for Mount Horeb/Barneveld,” Becker said. “We will probably have to win out to make the playoffs.”

Knutson completed 9 of 19 passes for 97 yards with one touchdown and two interceptions.

Stoughton senior offensive tackle Barrett Nelson, a University of Wisconsin-Madison commit, aggravated an ankle injury and was forced to the bench midway through the first quarter and didn’t return.

“Barrett wanted to give it a go and he battled,” Becker said. “Beckett Spilde came in as a sophomore and did a great job and we moved Gabe out to tackle.”

Stoughton’s defense had three sacks and forced one turnover. Senior linebacker John Harman had two sacks and senior linebacker Niko Jemilo had an interception in the end zone to thwart the SIlver Eagles’ first drive. The second sack by Harman knocked Monona Grove starting quarterback Casey Marron out of the game with a shoulder injury late in the first quarter.

Stoughton senior Darrick Hill came back from an ankle injury. It was tough sledding for the Vikings' running game. Monona Grove bottled up the Vikings’ running game, limiting them to 75 rushing yards. Hill rushed for 52 yards on 11 carries.

“Darrick ran hard,” Becker said. “It seemed like every time we moved the football we had a penalty and we hurt ourselves.”

Monona Grove senior running back Fabain Jackson rushed for 118 yards on 23 carries and scored a touchdown.

On Monona Grove‘s second possession, senior running back Tyler Dahlhauser broke loose for a 39-yard touchdown run. On the first play of the second quarter, Monona Grove quarterback Kody Cummings then threw a screen pass to Dahlhauser and he raced for a 75-yard TD to extend the Silver Eagles’ lead to 14-0.

Monona Grove’s Cuinn Larsh booted a 26-yard field goal to give the SIlver Eagles a 17-0 lead over the Vikings at the half.

Knutson connected with senior Landon Lynch-Youngman on a 16-yard TD pass with 9:06 left in the third quarter to cut the SIlver Eagles’ lead to 17-7.

“I knew he was the better wide receiver and I put it up where he could get it and he came down with a great catch,” Knutson said.

The big play that kept the drive alive came when Knutson dropped a snap on second-and-x.

He picked up the snap and as he scrambled tossed a pass to senior Ayden Probst who caught it and raced 43 yards. Probst finished with three receptions for 56 yards.

Knutson said he always works on scramble drills in practice.

“I was able to pick it up and escape out of the pocket and Ayden made himself open and I threw it to him and he made a great play with the ball,” Knutson said.

Monona Grove intercepted two passes by Knutson and delivered a turnover on downs on three of the Vikings’ possessions in the third quarter. The first interception came by Monona Gorve’s Connor Marsh at the Vikings’ 42-yard line. The SIlver Eagles capitalized on the short field when Jackson raced in for an 12-yard TD run.

“They have great team speed and will be a challenge,” Becker said.