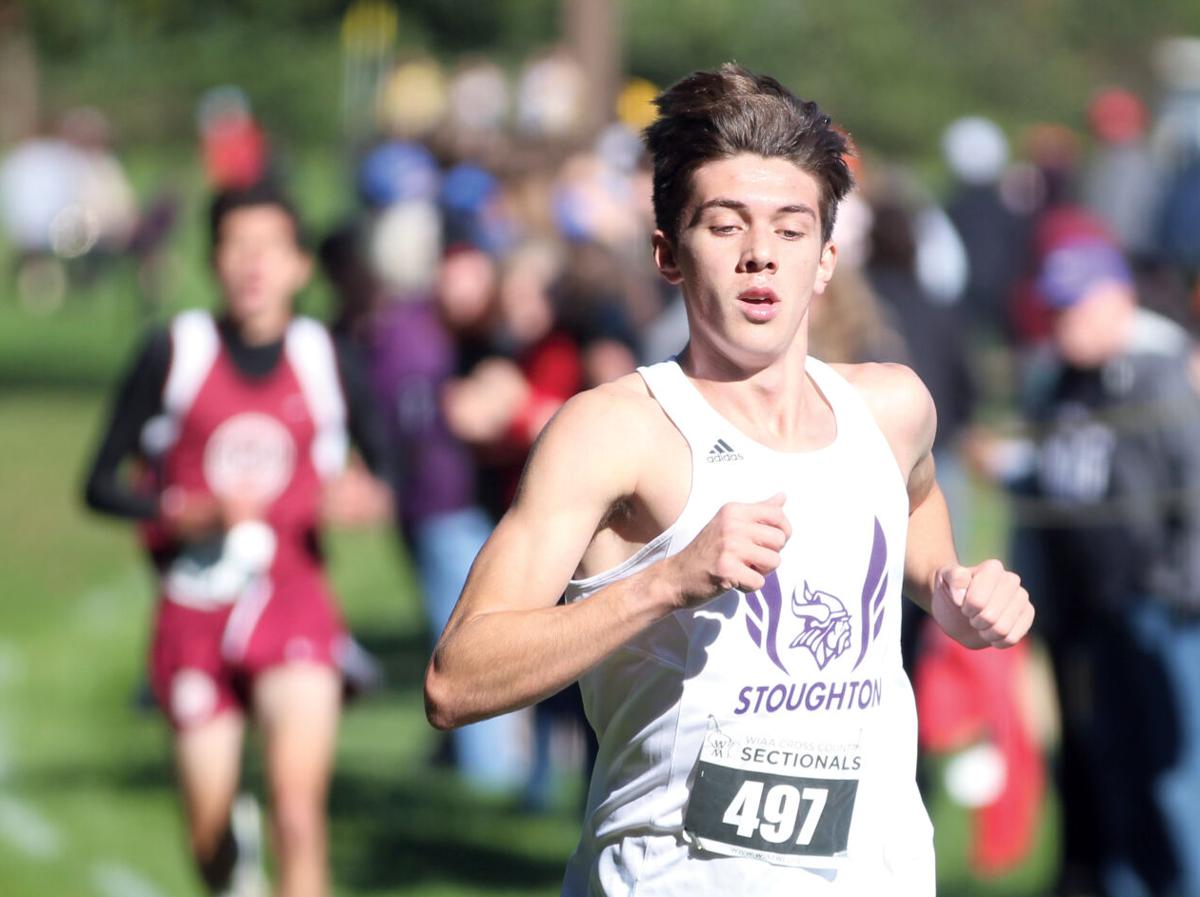 Stoughton's Jayden Zywicki races to the finish line during a WIAA Division 1 sectional on Saturday, Oct. 23, at Naga-Waukee Park in Hartland. Zywicki finished fourth to qualify for the state meet. 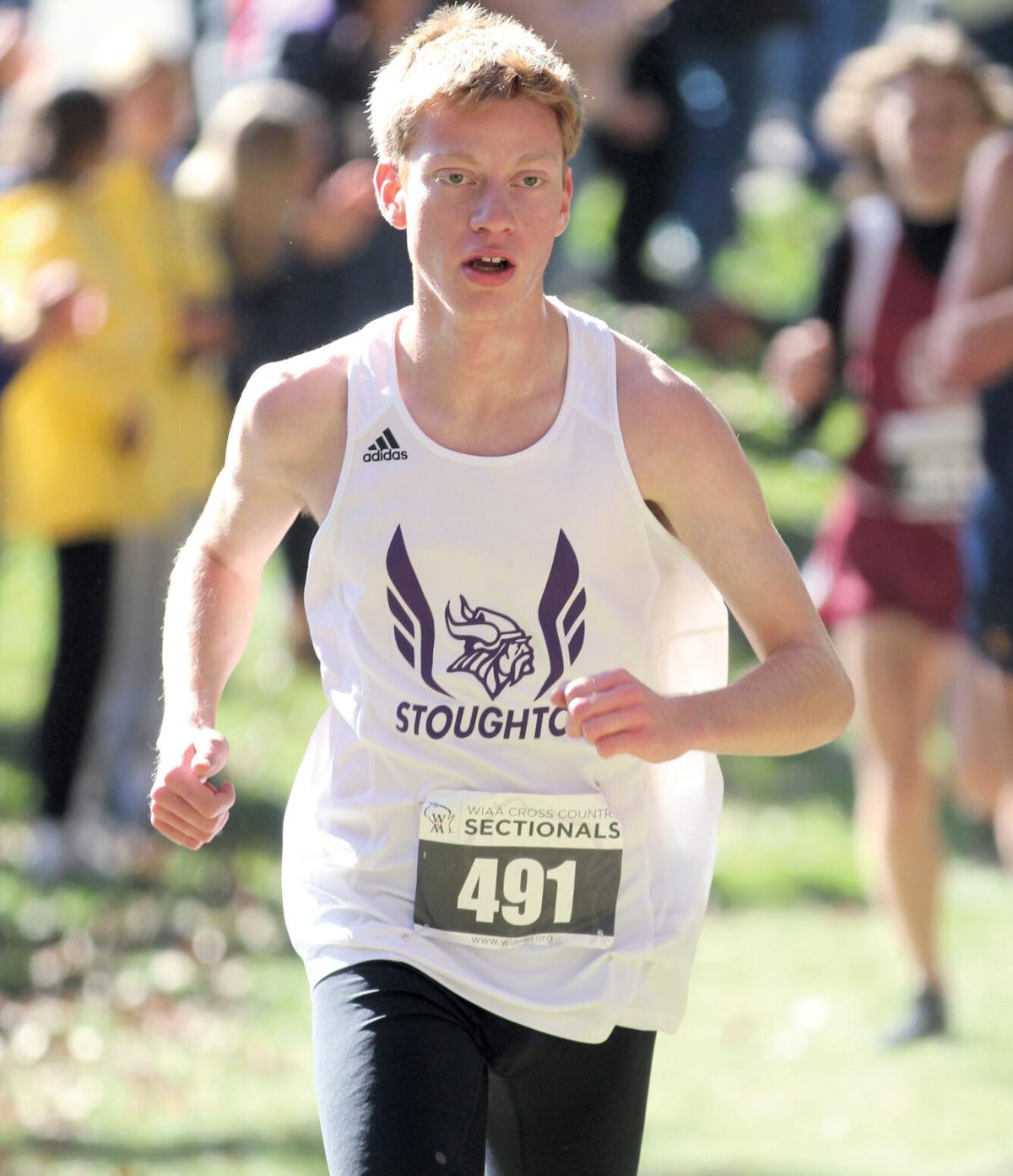 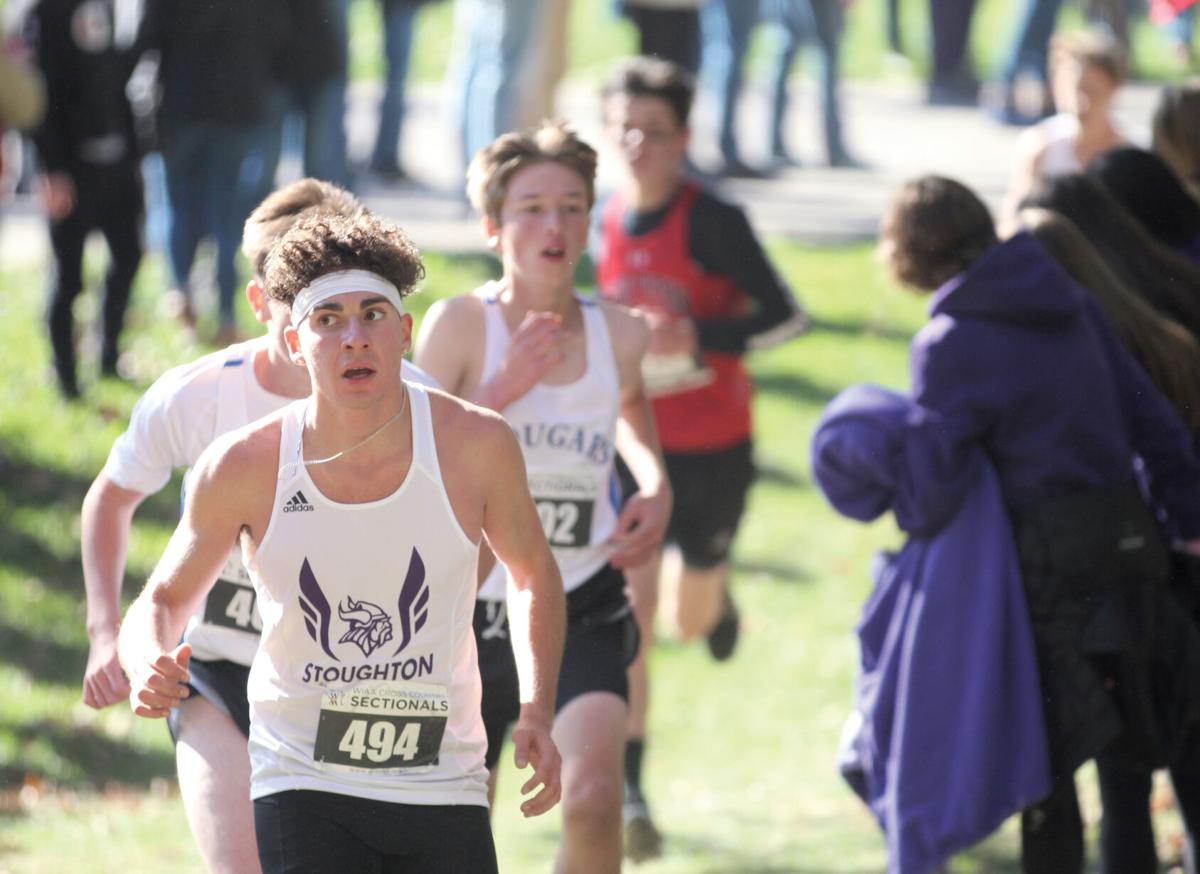 Stoughton's Max Manzo leads a group during a WIAA Division 1 sectional on Saturday, Oct. 23, at Naga-Waukee Park in Hartland.

Stoughton's Jayden Zywicki races to the finish line during a WIAA Division 1 sectional on Saturday, Oct. 23, at Naga-Waukee Park in Hartland. Zywicki finished fourth to qualify for the state meet.

Stoughton's Max Manzo leads a group during a WIAA Division 1 sectional on Saturday, Oct. 23, at Naga-Waukee Park in Hartland.

Jayden Zywicki does his homework.

On Saturday, he passed with flying colors.

“He (Zywicki) works hard in practice, he’s very talented and he also does his research as to what his competition is going to do,” Stoughton boys coach Patrick Schneider said. “Anytime you ask him about race strategy, he’s already got a plan and it’s usually spot on. I think he’s sort of a student of running more than just a plain runner.”

With the finish, Zywicki earned a spot at the WIAA Division 1 state meet — which will take place on Saturday, Oct. 30, in Wisconsin Rapids.

Zywicki crossed the finish line with a time of 16 minutes, 28.6 seconds.

“We went out slow, which is kind of what me and my coach were thinking,” Zywicki said. “Normally I would go out in front of them and try to go faster. I normally don’t like going out slow, but I did a good job of staying back and being patient.”

Sun Prairie junior Mateo Alvarado raced to the individual sectional championship with a time of 16:09.1. Oconomowoc junior’s Zachariah Vance (16:13.9) and Hayden Triebold (16:24.1) placed second and third, respectively, to lead the Racoons to the team title with 43 points. Sun Prairie also advanced to state as a team with 72 points, which was good for runner-up honors. Stoughton finished fifth with 141 points.

Stoughton senior Colton Hansen came up one spot short of joining Zywicki at the state meet. Hansen clocked in at 17:04.9, good for 11th overall and sixth overall among individuals from non-qualifying state teams. The top five racers not on state-bound teams qualify as individuals.

“He’s had a great career here, but I’m sure it’s disappointing,” Schneider said. “Everything he could do, he’s done. It just didn't turn out the right way at the very end.”

It will be the third time Zywicki will run at the state meet. Stoughton qualified for state last season as a team and Zywicki made it as an individual during his first year of cross country as a sophomore. Zywicki took 104th as a sophomore and placed 10th at the Fall Alternate state meet last spring.

“I don’t think I’m going to have as much nerves as the first or second time,” Zywicki said. “The first time it felt like such a big meet, super important and I think I kind of psyched myself out. Last year I felt like I needed to do well for my team. I still ran well, but I think I could have run better if I didn’t put as much pressure on myself.”

Zywicki will race in the WIAA Division 1 state meet on Saturday, Oct. 30, in Wisconsin Rapids at the Ridges Golf Course.