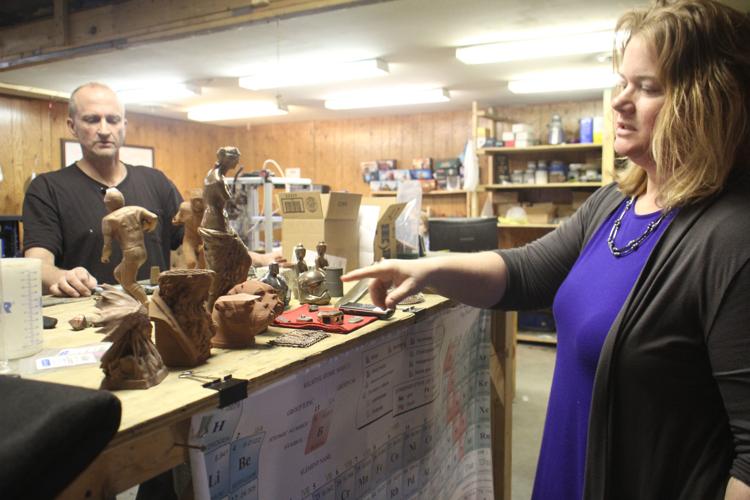 Brad Woods and Tricia Suess of the The Virtual Foundry talk about some of the items they’ve made to show companies what their product can do – everything from a sword to a Star Wars stormtrooper’s helmet. 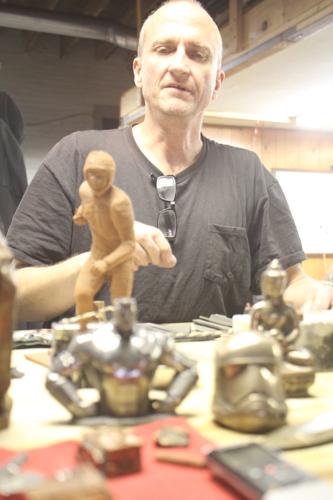 Brad Woods, The Virtual Foundry’s resident inventor, points out some of the samples the company’s made to show what their products can do. 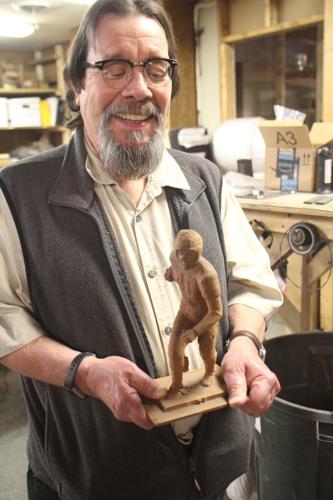 Bruce Starkey, who finances The Virtual Foundry, smiles as he talks about making the first 3D metal printed trophy, which went to Kent State University for the football team’s most valuable player last year. Here, he holds a rough model of the trophy. 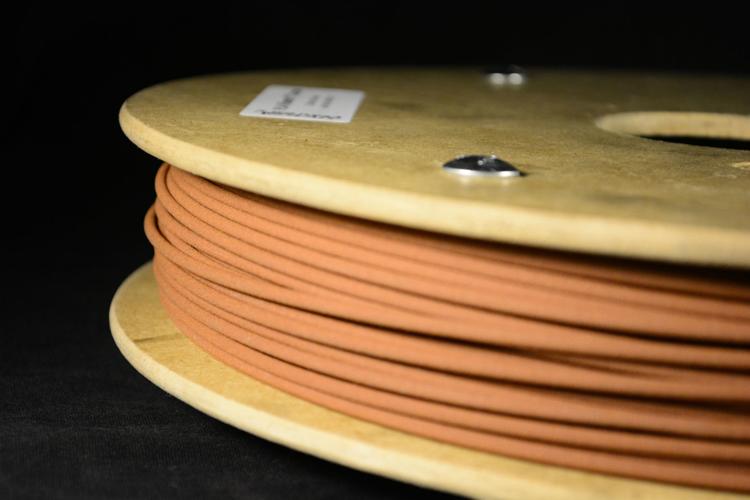 Filamet is the trademarked product The Virtual Product sells that is compatible with 3D printers, allowing them to print in metal.

Brad Woods and Tricia Suess of the The Virtual Foundry talk about some of the items they’ve made to show companies what their product can do – everything from a sword to a Star Wars stormtrooper’s helmet.

Brad Woods, The Virtual Foundry’s resident inventor, points out some of the samples the company’s made to show what their products can do.

Bruce Starkey, who finances The Virtual Foundry, smiles as he talks about making the first 3D metal printed trophy, which went to Kent State University for the football team’s most valuable player last year. Here, he holds a rough model of the trophy.

Filamet is the trademarked product The Virtual Product sells that is compatible with 3D printers, allowing them to print in metal.

They might be changing the manufacturing world as we know it, though you wouldn’t know it by the modest surroundings at the 211 Water Street facility that’s part garage, part science lab.

And that’s just the way they like it at The Virtual Foundry.

Now, the quest to create “pure metal prints from existing desktop printing hardware” isn’t necessarily akin to seeking the Holy Grail or anything – unless, of course, you ask the engineers at Lockheed-Martin, one of world’s top aerospace firms, who publicly complimented the company in 2015.

The Virtual Foundry inventor Brad Woods is so pleased with the praise, he’s placed it prominently on the company website.

“Engineers at Lockheed-Martin say we have found the ‘Holy Grail of 3-D printing,’” Woods said. “It’s quick, it’s painless, and most importantly, it leaves you with a 3-D printed object made entirely of high-purity metal.”

Last week, Woods, company president Tricia Suess and financial backer Bruce Starkey talked about their company’s simple goal – make a high-purity, high quality filament that can be used in “any printer you could get from your local big box store.”

“That’s the whole point,” Starkey said. “You can take a regular printer and you can print metal with it.”

They only started a few years ago, but already have product on all seven continents. Yes, even Antarctica, where they supply drill bits to plow through the ice at the “Ice Cube” Neutrino observatory at the south pole.”

“Soon we’re going to be out of the world,” Starkey added, grinning as he talked about working with NASA on 3-D printing in the vacuum of space, at the International Space Station.

“The existing metal 3-D printing techniques use powder, which requires gravity to hold them in place,” he said. “Our strategy does not require gravity.”

Pretty heady stuff, considering it all started in Woods’ basement.

A “software guy” who’s also worked much of his life with metals and sculpture, Woods’ interest was sparked a few years ago when 3-D printers started hitting the market.

“I got interested in how a physical object comes from the mathematical universe,” he said. “I envision a 3-D printer as just a hot glue gun on the end of a robot (but) I felt that to be relevant it had to be able to print metal.

“That’s what put me on the quest.”

Initially, Woods and Starkey talked about building their own 3-D printers, but quickly changed their approach.

“It became immediately obvious it was going to be a race to the bottom of the price war,” Woods said. “So we thought a little more and came back to, ‘Let’s do materials for 3-D printing.’”

After a lot of “trial and error,” the duo learned that they were very much on their own.

“Since there is no one doing this, there is no where to go,” Woods said. “There is the science of metallurgy and I’ve learned a lot from that, but we’re applying it differently.”

The process they continue to refine is essentially taking powdered metal and binding it into what looks like nylon rope. The key, Woods said, is to get the mixture as close to 100 percent metal as possible, for strength.

“You basically warm it up enough that you don’t melt it, but so the particles stick together, so you’re just welding millions of little particles together,” he said.

Finally, after producing about 20 pounds of what they have now trademarked as “Filamet,” they printed some prototypes and launched a successful Kickstarter campaign which raised $33,000. Soon, though, they realized they weren’t going to be able to find a vendor willing to put the new material through their multi-million dollar plastics equipment. So Woods started designing and custom-building his own processing equipment, often using tools in ways they probably never were intended.

“Since there was really no product like this on the market, existing handling equipment just wasn’t quite up to the job,” he said.

But it was there they found another advantage – they had no competitors.

Since other methods of crafting metal are limited to “million-dollar laser printers,” Woods said it’s just not cost-efficient for even the largest companies to attempt.

“I kind of thought we’d be squeezed out of the high-end market because all these people would have their own printers,” he said. “As it turns out, even for them its prohibitive expensive to operate.”

That advantage has brought them in contact with some of top companies around the world, including NASA. Woods said “at last count,” the company is working with “six or seven” different NASA labs around the country.

“They mostly don’t tell us what we’re doing with it,” he said. “But I’m sure it’s something interesting.”

Suess, who joined the company last August, said while the filament isn’t designed for large-scale manufacturing, it’s ideal for creating relatively inexpensive prototypes, and materials in small batches. The company often sends out samples of items that can be constructed using the filament.

“A lot of times it’s for proof of concept,” she said “We say, ‘We make this material, this is what it can turn into.’ A customer receives their spool and they put in their printer and then they’re printing in metal.”

Aside from NASA, some of the company’s other clients are working on some pretty heavy-duty projects,as well, including using tungsten instead of lead for things like containers for transporting radioactive medicine, or materials to block x-rays during exams.

“A replacement for lead-based product is pretty big priority in every industry, and this is a very safe alternative – it will do the same as thing as lead will but none of the bad stuff,” Woods said.

Other uses include materials that need to be able to stand up to corrosion or are highly magnetic. Suess said one of the more exciting projects they’ve been working on is a partnership with a plastic injection molding company in England that could revolutionize that industry.

The business, with six employees, currently offers copper, bronze and stainless steel, though Suess notes that Woods is “always working on new metals.”

“As it’s brand-new, the product is continually improved,” she said.

Starkey noted that the company works not only with metals, but glass and high-performance ceramics like those used in dental implants.

“We’ll probably have a 3-D printer with glass and ceramic at some time in the future,” he said. “We’re trying to create as many options as we can with the material.”

For Woods, one big problem for the company as they continue to grow is “not getting distracted.”

“We don’t want to go to too far down a path, but we are letting engineers and tech companies that use our companies set the pace for our development,” he said. “We look at it and say, ‘Now this is an area we can focus on,’ and that’s how we’ve been choosing our path as we go along here.”

And Suess said, despite the company’s growing stature, they feel they fit in just fine in downtown Stoughton, where she, Woods and Starkey all live and have known each other for some time.

“We don’t encourage customers to stop in, but every once awhile we’ll have a ‘super fan’ come in and say, ‘I was heading down the freeway and I use your product,’” she said. “It’s just awesome things like this are happening right in Stoughton, and we want to stay in town; that’s important to us. The hometown pride is strong.”

The Pancake Cafe will join Dunkin’ Donuts as another breakfast spot at Kettle Park West.